Seal of Approval – THE RISE OF AURORA WEST by Paul Pope, JT Petty, and David Rubin 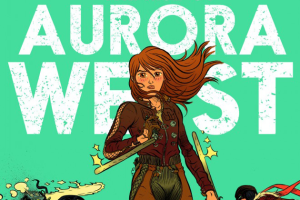 A few weeks ago I was awestruck by Paul Pope’s BATTLING BOY graphic novel. I was searching for the sequel, which I thought I had found when I came across THE RISE OF AURORA WEST. But something was different about it. Unlike the original comic, this one was the size of a manga. And the art was all black and white. And it turned out to be a prequel.

That said, AURORA is another great graphic novel work seeking out. It builds upon the world that Pope set up in BATTLING BOY and gives far more time for us to learn about the daughter of hero Haggard West.

Needless to say, Aurora is shaping up to be a character with depth. We learn about her family history, an invisible friend, and her insanely busy education and physical training schedule.

The honest criticism: this is not as good as BATTLING BOY. The art seems slap-dash at times and the story has a weird moment in which Aurora turns to one of her classmates out of nowhere and says something along the lines of, “Hey, can I trust you and tell you everything?” Then she brings him along on all of her investigations.

That said, it’s still a fun read. Plus, I really wanted to know way more about the worlds and the people Pope will be working with as he expands his main story and this provided some very cool insights (and plot twists!)

Part I of this article series is available here.

Today I’d like to focus on one of the ten chosen Black Eyed Susan novels for this school year.

The book in the spotlight is POISON by Bridget Zinn.

This review is going to be different from most reviews I write…mainly because I haven’t read this book yet. That being said, this book did something amazing this year, which makes it easy for me to recommend.

In order to fairly distribute my BES books, I raffle off my classroom library copies, since I only have one copy of each novel. When the winner of the POISON raffle finished reading the novel, he told me, “Mr. Goodman, I sat down on Saturday and read about 100 pages of the book without stopping…I haven’t done that in a long time.”

Isn’t that the best praise a YA novel can get?

Seal of Approval: THE 5TH WAVE by Rick Yancey

This book is AWESOME.

THE 5th WAVE has everything going for it: it’s a post-alien-apocalypse novel. It has guns. It has romance. It has valiance. It has strength. You should get a copy as soon as you can.

Everything begins with Cassie. She is alone and frazzled and living on the run. There’s no one left for her to trust, unless you count her gun as a person. Which, all things considered, isn’t such a crazy thought. That gun is a lot of things for her: the means for hunting, a reminder of her family, the equivalent of a security blanket.

Cassie is one of the last humans. She survived the first wave of the alien offensive and the ones that followed, watching as humanity dwindled and their extra-terrestrial observers remained untouchable in the skies. She carries her past like a boulder and the future isn’t looking all that rosy.

Yancey’s novel is a corner-to-corner winner, never ceasing to intrigue and always full of new surprises. You’ll find nail-biting moments buffered by incredibly tender scenes. Because when your world is falling apart, every moment is a big one, and you take solace when you can find it.

When a small percentage of humanity developed superpowers, there was hope that the people would use them for good. Instead, they chose to abuse their powers and crush humanity beneath them. David is one of the normal humans, living in Newcago, under the rule of Steelheart. And while Steelheart has proven to be absolutely invincible, has defeated every challenger without injury, David has witnessed something no one else has: he has seen Steelheart bleed.

David’s goal is to join up with the Reckoners, a band of humans dedicated to assassinating the overlords and freeing those who live in terror. He wants to make Steelheart bleed once more.

Full disclosure: reading Brandon Sanderson’s work will change you. The man is an amazing writer and, despite the self-deprecation on the Writing Excuses podcast, he is one of the top writers in ANY field, not just YA. (Seriously, read Mistborn.) Side note: if you are a writer, those podcasts are golden for gaining insight into the craft.

This book, his first foray into YA, is a heart-pounding, action-packed romp through a devastated future version of Chicago. David has seen his father die at the hands of Steelheart, he has watched as Steelheart’s right-hand men walk around like kings and treat others like slaves.

When David crosses paths with the Reckoners, it’s a messy introduction, and it has the chance to ruin their shot at assassinating an important figure in the city. But he has goals and he isn’t going to let anything get in his way.

I read this book in two days and I am sure that when the sequel drops in January, I’ll be doing something similar.